Spaceship Combat is an actual Atari 2600 game you can play emulated in your browser with the awesome Javatari emulator. I mainly made it just to see if I could. It is based on a much earlier QBasic game I made while a high school student in the mid 90's. Except this version offers a rudimentary (but challenging) AI enemy and multiple game modes that the original did not.

*To get started, click the 'Game Select' toggle switch on the console to choose game Mode, and press fire(space) to start the game. 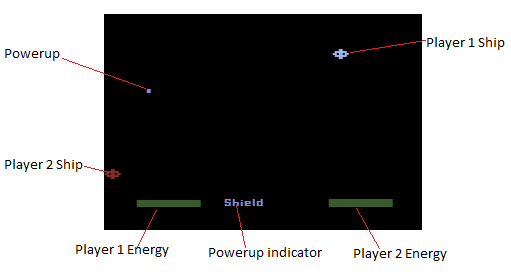 The goal is to destroy the other space ship.

Power-ups appear occsionally during the game.

If a powerup is not collected within 10 seconds it will explode, potentially causing damage to nearby ships.
Also, shooting a powerup will cause it to explode.

The AI in target practice mode is nearly impossible to beat...This mode was more of an afterthought so you're probably better off playing a 2 player game by yourself, or with a friend.